Posted on March 22, 2014 by Ricardo dos Santos One comment

My Definition of Innovation Competitions

In this context, I  use the term Innovation Competitions interchangeably with Inducement Prize Contests – these are distinctly different from recognition prizes in that they’re trying to incentivize new activity, not simply recognizing work already done.

From a micro-economics perspective, Innovation Competitions are different from Grants as the payoff to participants only occurs at the end of the effort, thus they share a greater portion of the risk upfront – this sounds kind of evil-genius on the part of the sponsors – I hope to make the argument that it is not –that competitions are actually very democratic and welcomed by the self-selected participants that they draw.

Innovation Competitions are actually something quite old – and a bit out of favor in the last half century, but certainly experiencing a remarkable resurgence in the last few years – and their popularity seems to have no end in sight (as we’re now clearly in an era of open innovation and ubiquitous, social IT tools).

Do you recognize the gentleman in the picture below?  No, it’s not Newt Gingrich. It’s one of England’s great commoner heroes, John Harrison.    The problem John solved?  Figuring out longitude at sea. 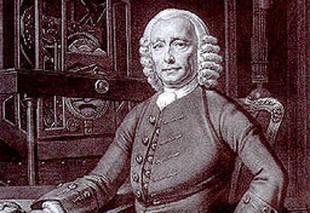 He did this as part of England’s longitude prize in the early 18th century (prompted after a series of naval disasters because captains wouldn’t know exactly where they were).  This wasn’t the first longitude prize, the Spanish and Dutch had also tried this but it was the first to finally succeed.

I recommend reading the full, fascinating story of the quest for measuring longitude.  Here I will just point out that it took John almost 30 years to come up with the H4 – the first accurate marine chronometer – John was not part of the scientific establishment which believed mostly in an astronomy solution by measuring lunar distances.  John was a carpenter and self-taught clock maker.   After some royal intervention by your last king (King George III), John finally won some recognition and various amounts of money for his progress, although the official 20K £ prize was never awarded – Despite all the drama, the prize was, at the end of the day, very successful and produced two viable methods of calculating longitude at sea.

As far as competitions explicitly designed to help launch new businesses, perhaps the best example are the university business plan competitions pioneered by the University of Texas in 1984.   The picture below  is from UCSD’s entrepreneur challenge in 2009 – I was a judge at that competition and ended up joining the winning company, Biological Dynamics – and still having fun!

The point is to maximize the chances of success by tapping into large numbers and diverse group of problem solvers – For the competition at hand, and for future competitions by the same sponsor – thus the need to fascinate not only the participants, but also the onlookers, which can include the public at large.

An interesting factoid here – did you know that over 25% of Americans saw the Spirit of St Louis a year after its historic flight from NY to Paris (and back) – of course the airplane piloted by Charles Lindbergh that won the Orteig prize in 1927 – sparking the commercial aviation industry.

I’ve broken down innovation competitions into five types according to their different sponsors (there are probably more than five but there are only five Olympic rings (five continents)).

Again, when I mention gov. prizes, I’m not talking about government grants – which are useful but certainly not Massively Open, Social and Fun.  Did you know that the US gov. spends approx. $140 billion in R&D funding (led by NIH with $30 billion)?    This compared to $30-40 billion by VC’s (and a lot of that in late stage funding for things like Zynga).   Grants will always be around – they are an important part of stimulating innovation where risks are too great or payouts too low.   But that doesn’t mean that there isn’t room for complementary methods to spur innovation- such as Prizes.

And lo and behold, the government is clearly stepping up its Prize or Grand Challenge activities, led by DARPA and NASA – They’ve even got a website dedicated to challenges – http://www.Challenge.gov where various government agencies have posted hundreds of prizes – so even the US government has a new found belief in Prizes (we’ve come full circle:  check out the zero-GPS precision navigation prize, hosted by innovation broker, Innocentive).

Non Profit prizes are perhaps the most common or at least, best publicized prizes – renowned examples include the XPrize, Bill & Melinda Gates challenges, the Methuselah Foundation (I interviewed their CEO as part of my research) and several now focused on startup formation (e.g. the awesome Mass Challenge, and the Clean Tech Open).

Note that Peter Diamandis (my friend…ehhr on Twitter :-)) of XPrize was inspired to start his foundation after reading the story of the Spirit of St Louis – even got the support of the Lindbergh family in St Louis!

Corporations have stepped up their prize game –some of the best known examples include the Netflix Prize, GE Healthymagination, Qualcomm’s QPrize and the Heritage Provider Network Health Prize – Some of the sponsors are the CR&D depts., open innovation efforts or even the corporate VC arms (in the case of aiding startup formation vs. directly solving a tough technical challenge per se).

Student competitions are different in that the participants are also part of the sponsoring organization – like the employee competitions I’ll showcase next.   Lots of activity here starting at the high school level, with the student run, biz school competitions attracting the most money – Rice’s competition gave away $1.5 million in prize money.   Formats also vary – with most competitions now emphasizing ‘Lean Startup’ methods vs. planning-centric business plan approaches, e.g. the Lean Model at SDSU.

Finally, my favorite, employee competitions – I started this at Qualcomm back in 2005 (The Venture Fest competition).   For me, this was the key insight:  You want massive employee engagement in innovation?  Launch an Idea Collaboration Platform.  You want to do a little more and actually develop employee’s innovation skills (not just ideation, but iterative experimentation)?  Launch an Accelerator program.  You want both in one easy to implement AND to market package?  Launch an Employee Competition.

The combination of a massive multi-player online ideation platform with the power of a small team, off-line ‘startup’ experimentation program is what I dubbed “Collective Entrepreneurship” (It’s like Spigit marrying Y-Combinator and having a baby).

Needless to say, I’ve been quite unimpressed with most employee collaboration software platforms (aka Idea Management Systems), that actually fail on their promise to provide employee engagement, much less innovation skills development.   There just doesn’t seem to be an easy to understand, contextual meaning or point to the whole thing! (unless you resort to short-lived, ‘bribing’ tactics)

…Except for this one!

One company that’s solved this is Belgium’s VentureSpirit, started by people that have actually helped companies launch innovative ventures.

VentureSpirit makes employee collaboration for innovation into a game or sport – But not just any sport – The right sport, Venturing!  (Aka, entrepreneurs seeking advice from mentors and money from investors in a competitive or scarce resource environment).

In the VentureSpirit game, any employee can self-select him or herself as an ‘intrapreneur’ and use the collaboration platform to find like minded peers to build the equivalent of a virtual startup.  The virtual startup then competes in a ‘free market’ gaming environment to recruit mentors and raise capital.   Other employees and executives play the role of crowd-funders, angels and venture capitalists.  The best ideas naturally ‘bubble up’ to the top of the venture heap through multiple rounds of virtual funding.  As a team survives into the next round of the game, it is requested to provide further research and development of their concept (and the odds of being funded in the real world rise accordingly) – (bad or misunderstood ideas (or bad startups) die in the early rounds of the game).

The VentureSpirit game normally lasts 3-4 months (everyone is playing on a part time basis) – This is a sufficient period in which participants at all levels of the corporation learn a great deal about an assortment of venturing opportunities, but most importantly, the iterative process of innovation (and how to fight for it!)

Ironically, VentureSpirit was first launched to support a student competition in Belgium, Battle of Talents (which they still support). VentureSpirit’s gracious and impressive General Manager and Founder, Stefan Triest, whom I interviewed for this blog, has certainly seen the future when it comes to fighting the tedium and falseness of innovation directives that fail to connect with younger generations – make them ‘real’ by first making them a game.

When Innovation Competitions Are Most Appropriate

Innovation Competitions or Inducement Prizes are not a Panacea.  They are most appropriate when:

For corporations, I’d especially call attention to the third point above, which is that competitions don’t just have to be reactive – they can be used as a proactive tool to stir the innovation pot.

If you ask me what motivates participants in competitions (Did I mention they generally put in 5, 10, 50 times the effort compared to the Prize amount!)… It’s that it’s not just about the Prize – It’s the adventure during AND the adventure possible after the competition  – the competition format is in many ways just a ruse – something to make people do what they need to pursue their dreams.

Leave you with a quote from a sci-fi writer and friend in San Diego – David Brin.

“Competition is the great creative force of the universe.”